Féeries: Uniwax with Gilles Touré for the designer’s 20 years of career

On Saturday 08 November 2014, at the Congress Hall of Sofitel Hotel Ivoire, the 20 years of Gilles Toure were organized. It was a splendid event celebrating the designer’s 20-year career anniversary. 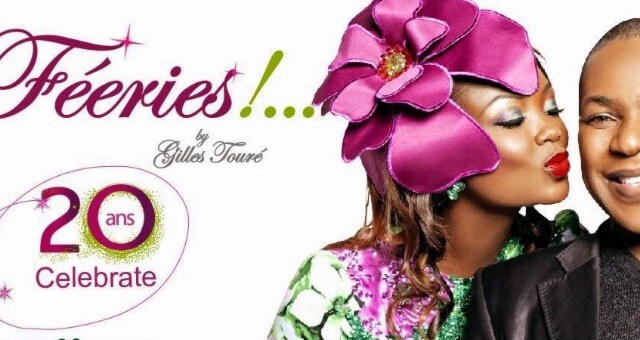 Before a hand-picked audience, models, artists and TV stars of two different times, between retrospective and modernity, offered a magical show for more than 3 hours.

There were several political figures In this select public, including the First Lady, Mrs. Dominique Ouattara, the President of the Parliament, the Ministers of Culture and Francophonie, of National Education, of Health, Women and Children, top designers of the fashion world including Pathe O, artistic godfather of the event, Colle Ardo Sow, artistic godmother of Féeries and former TV stars like Georges Tai Benson.

An event in which the UNIWAX brand took part as sponsor.

Fééries wanted to be a tribute to the artist's past and present and beyond to fashion in general. This is why it cheerfully brought together on the fashion stage, both former celebrities of the world of fashion and of TV, and this is how George Tai Benson opened the series of speeches.

A moved Gilles Toure took the floor and first paid tribute to his parents who had believed in him and in his dream. He also thanked all those who had accompanied him for 20 years in that exciting adventure. To him, a 20-year career means experience but also fragility.

Therefore, he asked his fans to always support him. Finally, he asked the First Lady to plead with her beloved husband to support the world of fashion and textile.

Following him, the godmother of the event, the First Lady of Côte d'Ivoire, Mrs. Dominique Ouattara, praised the artist's work and expressed how proud the entire Côte d’Ivoire feels about him.

He was therefore rightfully conferred the title of Officer in the Order of Cultural Merit of Côte d'Ivoire by the Minister of Culture. After the speeches, Gilles made the audience envious with various displays: beginnings, blossoming, radiance, press and Voilà for You, the latest product by Vlisco.

The Uniwax brand was very present at the event. For nearly thirty minutes, the models wonderfully exhibited the beautiful outfits made by the goldsmith hands of the designer himself.

Pompous models for formal and glamorous evenings but also classic outfits for little walks; everything was there. Renowned artists, such as Nayanka Bell, made the event extra special. A delighted evening which ended as it had began with a round of emotion including the cake-cutting with the designer backed by Virginie Toure, his mother, Mrs. Dominique Ouattara, Mr. Guillaume Soro and the Ministers Kandia Camara, Raymonde Goudou Coffie, Anne Désirée Oulotto and Maurice Bandaman.

By reconciling the past with present trends, Gilles Toure showed again, as a confirmation, his great sense of creativity and boldness.

And Uniwax, by associating its image with the event, once again wanted to show its commitment to the expression of excellence and African beauty.